Two of Only 3 Glaciers in a Rainforest, Descending to just 250m (820ft) above sea level, Franz Josef Glacier and Fox glaciers are two of only three glaciers in the world that descend into a temperate rainforest zone, the other is the Perito Merino Glacier in Argentina.

These two Glaciers  descend from the southern alps into temperate rain forest just 300 meters above sea level and only a few kilometers from the coastline, they are truly two of the most unique glaciers in the world. Most glaciers in the world are located above 300 meters from sea level and located far from the coastline. The Franz Josef Glacier and Fox glacier are located  on the West Coast of New Zealand at 43.5 degrees south from the equator, equivalent in latitude to the south of France in Northern hemisphere. It’s an unusual place to find a glacier! END_OF_DOCUMENT_TOKEN_TO_BE_REPLACED

I wasn’t really into mountain climb before I moved to New Zealand, I always love nature but I never did mountain hikes when I lived in Perth, Australia because Western Australia is relatively a giant mass of flat land. Also, Australia is inhabited by some of the most poisonous reptiles, insects at its outback, so going to Australia’s wild outdoor without having any knowledge of its animals could be a very bad idea. END_OF_DOCUMENT_TOKEN_TO_BE_REPLACED 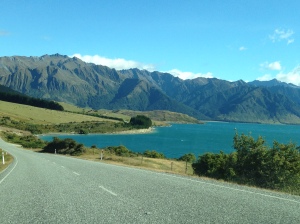 New Zealand is a country that begs to be explored on road trips. Why? because some of the best scenery is found on the way to a popular area or to a town. While New Zealand isn’t a cheap place to travel to, a road trip is by all standards a pretty budget friendly activity, cars or campervans are cheap to rent.

New Zealand is relatively small but it packs some of the world’s most beautiful scenery from white sand beaches, thick rainforest, active volcanoes, heaps of blue and turquoise lakes, glaciers, golden plains, majestic fjord and the towering peaks of the southern alps – all in just two main islands of New Zealand – North island and South island. Many people do not know that New Zealand is slightly bigger than the UK,  it’s claimed that New Zealand has an estimated 31.1 million sheep, whereas the human population is only 4.5 million people. END_OF_DOCUMENT_TOKEN_TO_BE_REPLACED

One thing that I noticed when I moved to New zealand was how strong sun is in New Zealand, when I lived in Singapore, I wouldn’t apply sun block when I went to the beach and I didn’t get sunburn, or even when I lived in Perth, Australia. But, I can get sunburn easily in New zealand during summer even on a cloudy day. Believe it or not,  New Zealand has a 40 percent greater UV radiation level than its geographically matched location (latitude, longitude and altitude) in the Northern hemisphere.  END_OF_DOCUMENT_TOKEN_TO_BE_REPLACED

END_OF_DOCUMENT_TOKEN_TO_BE_REPLACED

Not until I watched Lord of the ring, the movie that made New Zealand famous, New Zealand never came to my attention. All I knew about New Zealand was a small country next to Australia, I never thought that the landscape of New Zealand is completely different from Australia since its geographical location is not far from its closest neighboring country. I was stunned by the dramatic natural beauty of New Zealand as depicted on the movie Lord of the ring, the filming locations were so distinctive like no place I had ever seen before, from snow capped mountains, hilly green pastures, rugged rocks, and golden brown plains.  These movies are the reason I became interested in  New Zealand as a place to visit and potentially live one day. I’m not a big fan of Lord of the ring trilogy movies but I’m a big fan of the wild and crazy landscapes as shown on the movie.

New Zealand is a land of picturesque lakes, often painted and photographed for their arresting elegance and tranquil beauty. The untouched beauty of New Zealand has remained intact over the years.

END_OF_DOCUMENT_TOKEN_TO_BE_REPLACED

This hike is definitely a must-do in New Zealand! The crossing and views throughout are good.  I can see now why people call this one of the world’s best one-day hikes.

I really recommend starting the track as early in the day as possible when it is quiet and before the crowds arrive because this track is extremely popular.  as you will hike about 6 to 10 hours, depending on your fitness and you will make lots of stops to take photos. The views were absolutely incomparable. I did the Tongariro Alpine Crossing at the beginning of February and had a pretty good weather. In 6 hours you pass through several types of scenery, all completely different from the others. It took us almost 10 hours to complete the entire hike. We drove 2 cars and we left the other car at the end parking lot because the parking lot at the end of the track is not the one you started at. So, If you do not arrange your own transportation, make sure that you got your shuttle/transport/pick-up sorted before you leave as you cannot book them during the day. END_OF_DOCUMENT_TOKEN_TO_BE_REPLACED

Creating spaces to reconnect with God and with each other

Whatever swaying in my mind

A musician's super budget backpacking/couchsurfing stories around the world